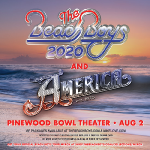 The Beach Boys have sold over 100 million records worldwide and have received more than 33 RIAA Platinum and Gold record awards. The Rock And Roll Hall of Famers where also honored at the 2001 Grammy Awards with the Lifetime Achievement Award. With more than five decades of touring under their belts, The Beach Boys have performed more concerts than any major rock band in history.

About America
The year 2020 marks the 50th Anniversary of perennial classic-rock favorite, America. Founding members, Gerry Beckley and Dewey Bunnell (along with former bandmate Dan Peek) met in high school in London in the late 1960s and quickly harmonized their way to the top of the charts on the strength of their signature song “A Horse With No Name.” America became a global household name and paved the way with an impressive string of hits following the success of their first #1 single. Forty-plus years later, these friends are still making music together, touring the world and thrilling audiences with their timeless sound.

Ticket Info: https://www.ticketmaster.com/Pinewood-Bowl-Theater-tickets-Lincoln/venue/50495
Event Website: https://www.pinewoodbowltheater.com/event/beachboysandamerica2020/
Add to my calendar
Venue: Pinewood Bowl - Lincoln
Surrounded by the natural beauty of evergreens, the venue offers a night under the stars like no other. Pinewood Bowl serves a local population of 285,000 and can accommodate up to 5,500 people. “Concerts at Pinewood Bowl Theater and its breathtaking natural setting will be a memorable experience for the fans as well as for the musicians,” remarks SMG Lincoln General Manager Tom Lorenz. Lincoln Mayor Chris Beutler adds, “I encourage the community to support the summer concert series at the Pinewood Bowl Theater as we start a new chapter in the long history of this iconic amphitheater.”
3201 South Coddington Avenue
Lincoln, NE 68526
Phone: (402) 904-4444
Hours: Monday – Friday: 11:30am – 5:30pm
Website: https://www.pinewoodbowltheater.com/
Ticketing: http://www.ticketmaster.com/Pinewood-Bowl-Theater-tickets-Lincoln/venue/50495
Copyright © 2020 by NRG Media. Internet Development by Frankly Media.