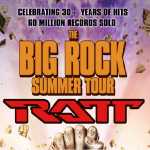 The Big Rock Summer Tour is coming to the 2020 Nebraska State Fair. Ratt, Skid Row and Quiet Riot will perform on Saturday, Sept. 5th 7 p.m., at the Heartland Events Center.

“This is a head banger’s dream,” said Nebraska State Fair Executive Director, Lori Cox. “Fans of 80s hair metal won’t want to miss this incredible lineup. This is 30 years of rock in one amazing night.”

Tickets for the concert go on sale online only Friday, March 13 at 10 a.m. Prices are $29 for reserved seats, $39 for reserved floor seats and $49 for pit tickets. Gate admission is included in the ticket price.

Ratt was instrumental in the creation of the Los Angeles glam rock scene of the 80s. The influence of their music and image shaped generations of rock bands worldwide. With albums certified gold, platinum and multi-platinum by the RIAA, led by the five-time platinum “Out Of The Cellar;” RATT boasts no less than nine Top 40 rock hits – “Round And Round,” “Back For More,” “Wanted Man,” “Lay It Down,” “You’re In Love,” “Dance,” “Way Cool, Jr.,” ”Lovin’ You’s A Dirty Job” and “Givin’ Yourself Away.”

Skid Row was the first heavy-metal band to debut at No.1 on the Billboard Top 200 Album Chart with their 1991 sophomore release “Slave to The Grind,” which was fueled by the hits ”Monkey Business and the album’s title track. Their self-titled 1989 debut album included the anthems “Youth Gone Wild,” “I Remember You” and “18 And Life” and has sold more than 5 million albums. The band has sold more than 22 million albums worldwide.

Quiet Riot is a rock-and-roll phenomenon, famously described as the first heavy-metal band to the top of the pop chart at #1 on Billboard magazine. The Los Angeles quartet became an overnight sensation thanks to their 1983 smash album “Mental Health”.