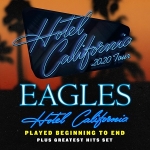 Eagles – Don Henley, Joe Walsh and Timothy B. Schmit, with Deacon Frey and Vince Gill – are bringing their recent, highly acclaimed “Hotel California” performances on tour in 2020 with concerts and their making a stop in Denver for two nights. The Eagles will perform their iconic 1977 Hotel California each night. The tour now spans February 7 – April 24. An orchestra and choir will accompany the band on the tour, which will feature the Hotel California set followed by a second set of the band’s greatest hits.