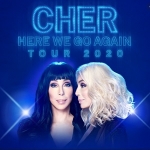 Due to overwhelming demand, Cher has extended her phenomenally successful Here We Go Again Tour, announcing additional dates in 2020. Nile Rodgers & CHIC will continue as the special guest for the North American outing. In May 2019, Cher made a stop in Omaha, now she’s coming to Lincoln November 12, 2020.