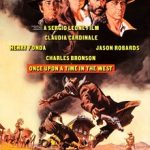 and this one has fantastic cinematography that really captures what the landscape must have looked like in the latter part of the 1800s. By today’s attention-span standards Once Upon a Time in the West has very long and drawn out scenes that may bore some but I love this movie. It came out in 1968 and features Henry Fonda and Charles Bronson.

Once Upon a Time in the West is a 1968 epic Spaghetti Western film directed by Sergio Leone, who co-wrote it with Sergio Donati based on a story by Dario Argento, Bernardo Bertolucci, and Leone. It stars Henry Fonda, cast against type, as the villain,[8] Charles Bronson as his nemesis, Jason Robards as a bandit, and Claudia Cardinale as a newly widowed homesteader.

After directing The Good, the Bad and the Ugly, Leone decided to retire from Westerns and desired to produce his film based on The Hoods, which eventually became Once Upon a Time in America, but Leone accepted an offer from Paramount Pictures to provide access to Henry Fonda and to use a budget to produce another Western film. He recruited Bertolucci and Argento to devise the plot of the film in 1966, researching other Western films in the process. After Clint Eastwood turned down an offer to play the movie’s protagonist, Bronson was offered the role. During production, Leone recruited Donati to rewrite the script due to concerns over time limitations.