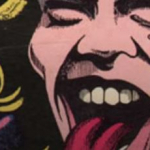 …and they haven’t commented on it which I find strange but it’s nice to have. Check it out.

The songs were recorded during the ’60s and ’70s, and among them is the 1974 demo of “It’s Only Rock ‘n Roll” with David Bowie on vocals and Ronnie Wood on guitar before Woody joined the band.