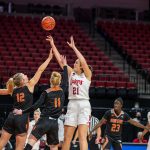 After falling in four sets to 4th ranked Minnesota Friday, the 5th ranked Nebraska volleyball team bounced back yesterday with a sweep of the Gophers (25-17, 25-15, 25-22). This was the Huskers’ first win over an AVCA top-five ranked team since the 2018 NCAA Semifinal win over then 3rd ranked Illinois. It was their first sweep of a top-five team since Sept. 29, 2017 against No. 3 Minnesota. Now 7-1 in the year, the Huskers travel to Madison this weekend for a pair of matches against the undefeated top ranked Wisconsin Badgers. First serve is at 7:00 both Friday and Saturday.

The Nebraska women’s basketball team knocked down a season high 13-threes in an 87-72 win over Penn State yesterday at Pinnacle Bank Arena. The Husker women travel to Minneapolis Wednesday for a game against Minnesota. Tipoff will be at 6:00.

Purdue used a 19-4 second-half run en route to a 75-58 win over the Nebraska men’s basketball team Saturday afternoon at Pinnacle Bank Arena. The Huskers stay in Lincoln to host Penn State tomorrow night. The game tips off at 7:00.

The Big Ten Conference has updated the Nebraska men’s basketball schedule. The Huskers will travel to Illinois Thursday, before returning to Pinnacle Bank Arena for home games against Minnesota Saturday, and Rutgers on Monday, March 1st. The Huskers will then hit the road for their final two regular-season games, traveling to Iowa on Thursday, March 4th, and Northwestern on Sunday, March 7th. Times for the Iowa and Northwestern games will be announced closer to tipoff.

Winning seven individual matches on the day, the Nebraska wrestling team closed the 2021 regular season with a 25-9 win over Illinois on Sunday in Champaign, Illinois. The Huskers are now off until the Big Ten Championships on March 6-7 at State College in Pennsylvania.

The UNK basketball teams closed out the home portion of their schedule Saturday, hosting Lincoln University. In the men’s game, a three-pointer from the left wing with sixth tenths of a second left helped the Blue Tigers edge the Lopers, 68-65. The nationally ranked Loper women cruised, winning easily 79-57. The Loper women are in-line to host an MIAA Tournament first round game on Wednesday, March 3rd. The Lopers close the regular season on the road this week with games at Northwest Missouri and Missouri Western.

The UNK wrestling team has moved into the number on spot in the third regular season edition of the National Wrestling Coaches Association (NWCA) Division II Top 25 Poll. The Lopers will be traveling to Grand Junction, Colorado this weekend for the NCAA Super Region VI Championships. To secure a spot at nationals this year a wrestler in Region VI has to win his weight class. Seven “Wild Cards” will then be selected at a coaches meeting for a total of 17 qualifiers. The national meet will be held in St. Louis, Missouri., March 12-13.

The UNK softball team split Friday’s double-header against the Regis Rangers in Denver, winning the opener 8-6, but dropping the nightcap 6-4. Yesterday they lost a pair of games at the UCO/OC Festival in Edmond, Oklahoma… falling to Cameron, 8-5, and Oklahoma Baptist, 8-4 (8 innings). That tourney was pushed back two full days due to cold weather and field conditions. The Lopers will play Colorado Christian and Southern Nazarene today.

The Tri-City Storm opened an eight game homestand with a 4-1 win over Lincoln Friday, but dropped a pair of games to Sioux Falls, losing 5-4 Saturday, and 2-1 yesterday. The Storm will host Fargo and Sioux City this weekend.