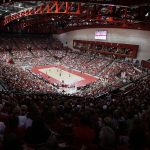 The Nebraska Volleyball team is ranked No. 5 in the American Volleyball Coaches Association preseason poll released released Tuesday. Wisconsin will open the season as the preseason No. 1, followed by Texas, Stanford and Kentucky. Other Big Ten teams ranked in the preseason poll include Minnesota (#7), Penn State (#9), Purdue (#13) and Michigan (#24). Creighton is 15th. The Huskers begin a 22-match regular season schedule on Jan. 22 against Indiana.

The Nebraska women’s basketball will be looking for a third straight Big Ten win tomorrow with a game at Michigan. It’s the third top-15 team the Huskers have faced in the last three weeks as the Wolverines are ranked 14th in the Coaches Poll and 15th in the AP Top-25. The Husker women and Wolverines tipoff tomorrow night 5:00.

The Nebraska wrestling team will open their season Friday as the country’s No. 5 team, according to the latest National Wrestling Coaches Association’s Top 25 poll. The Huskers will host Minnesota at 8 p.m. Friday at the Devaney Sports Center. The Golden Gophers are ranked No. 12.

The 7th ranked Creighton men’s basketball team is in action tonight hosting Seton Hall. Tip off is at 8 on FS1.

The Tri-City Storm will face the Lincoln Stars for a fourth straight time tonight at the Ice Box in Lincoln. The puck will drop tonight at 7:05. The Storm will return home this weekend for a pair of games against Sioux City.