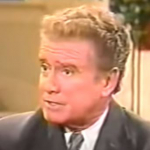 Blast from the past.

Regis Philbin spent 15 years co-hosting a hugely successful syndicated daytime hour with Kathie Lee Gifford, and another eight alongside Kelly Ripa, died Friday at his New York apartment from a heart attack. He was 88.

The native New Yorker’s career also included Who Wants to Be A Millionaire?, which kicked off the prime time game show revival in the late 1990s. He also spent three years as Joey Bishop’s sidekick in the late ’60s as ABC tried to topple late night king Johnny Carson, as well as popular local shows in Los Angeles, San Diego and San Francisco.

“Rege” received a star on the Hollywood Walk of Fame in 2003 and a Lifetime Achievement Award from the Daytime Emmy Awards in 2008.