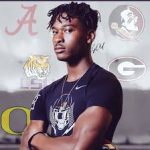 Nebraska added its final scholarship player to the class of 2020 on Friday evening when defensive back Nadab Joseph, a four-star juco prospect from Miami, announced his commitment to Nebraska. Joseph was the top junior college cornerback from the 2020 recruiting class. The 6-foot-2, 190-pound defensive back also had offers from Alabama, Baylor, Colorado and Georgia.

HUSKERMAX.com also has links to these stories;
– The NCAA has postponed any decision on the fate of this fall’s sports championships until August.
– Rutgers has joined Michigan State in quarantining its football team.
– Several Husker newcomers have revealed their jersey numbers on social media.
– Walk-on linebacker Joseph Johnson has entered his name in the transfer portal.

The West Nebraska All-Star Football Game was canceled after a player tested positive for COVID-19.