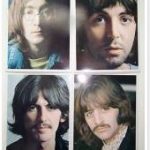 The Beatles are among four pop culture figures in the first line of Lego Art.

It’s Legos for adults! Instead of little Lego models, you assemble wall art.

It’s 2,933 pieces that make up the images of John Lennon, Paul McCartney, George Harrison and Ringo Starr and based on the four portraits that was included in The Beatles album ‘Lego Be’, ‘I mean Let it Be’..

Each set will sell for $120 — meaning it will cost $480 to assemble the Fab Four. No release date has been announced.