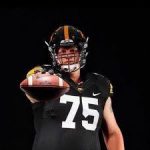 The Nebraska football team has added a notable transfer from a division rival. Ezra Miller, a 6-foot-6, 310 pound former four-star tackle signee at Iowa, announced he has been admitted to UNL and plans on playing for the Huskers as a walk on. Because Miller was a scholarship player for the Hawkeyes, he will have to sit out a year under the NCAA’s transfer rules unless he is granted a wavier for immediate eligibility. He has already used a redshirt season, so he has four remaining years of eligibility. If he does not get a waiver and has to sit out the 2020 season, he will have three years of eligibility remaining beginning in 2021.

Athon Sports has ranked the Big Ten football coaches and Nebraska’s Scott Frost comes in at number 9. The publication has Penn State’s James Franklin as it’s top coach in the league.

Former Creighton basketball star Anthony Tolliver has signed with the Memphis Grizzlies. Tolliver had previously played for the team this season and had signed a ten day contract prior to the Coronavirus outbreak. The Grizzlies are one of 12 Western Conference teams of the 22 overall that will play in Orlando when the NBA resumes on June 30th.