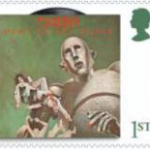 Queen is getting the stamp treatment from U.K.’s Royal Mail.

The postal service is releasing a set of 13 stamps on July 9th. There are eight of album covers — Queen II, Sheer Heart Attack, A Night at the Opera, News of the World, The Game, Greatest Hits, The Works and Innuendo — four that have each member performing and a stamp of the band’s first press photo from the early 1970s.

Brian May said in a statement, “It’s hard to put into words what I feel when looking at these beautiful stamps. Since we four precocious boys started out on our quest 50 years ago, our lives have been devoted to making our impossible dream come true. Sometimes it’s strange to wake up and realize the position in which we are now held — we have become a national institution!”

Will they be made available in America? Not sure…