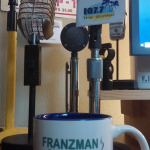 I have heard countless musicians both famous and from all walks of life cite The Beatles on Ed Sullivan as the moment they knew what they wanted to do for a living. I completely understand that when I watch the black and white footage but I didn’t see it as it aired because I was minus 3 years old at the time.

For me, it was Tower of Power on TV that changed my world. I was already playing drums and when Tower of Power performed ‘Believe it” on David Letterman I wanted to be the drummer, the singer, the saxophonist. So highly influential to me this performance had such an affect on me I nearly jumped off the couch. It’s rock n’ roll to me but so much more. It’s funk, it’s Motown, it’s dance, it’s perfect. It was the summer of ’69, no, it was 1984 I believe and shortly there-after I was in the first of at least 13 bands. It was a good run and it all started with Tower of Power.

Watch the Video and let me know if it affects you. Does it make you ‘dancie’ in your ‘pantsy’?