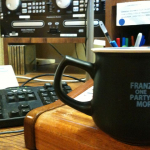 Right from the very beginning of my becoming a music fan I read the liner notes. From the very first record or cassette I got my hands on I read the notes back-to- front. That’s how I have a brain filled with random information like RUSH: Exit Stage Left lists Geddy Lee as not just bass guitar & vocals but bass pedal synthesizer, and occasional rhythm guitar…if I hadn’t read the liner notes I would have never known what he was doing with his feet. The rhythm guitar thing surprised me, too.

You learn things by reading liner notes that most people don’t know and maybe don’t care about. I never tried to retain the information but it stuck. Van Halen’s debut album credits the vocalist as Dave Roth yet, Van Halen II lists him as David Lee Roth. Who cares? Well I do. I enjoy reading the liner notes because it teaches me a bit more about the music I like.

In all of my years of reading the front, back and inside, there’s one name that has appeared the most on albums, singles and most magazine covers and that name is Neil Zlozower. Means nothing the first few times I saw it but by the time I was 12 the questions already started presenting themselves: Why and how is this one guy credited with all of these pictures of famous people? Are there no other photographers?

Over the next 10 years his name appeared with even GREATER frequency and now it’s all explained in a great documentary about him. (He was a teenager when he started photographing famous bands).

IN YOUR FACE: The Neil Zlozower Movie press release describes it as follows:

“IN YOUR FACE: The Neil Zlozower Movie is a documentary about Neil Zlozower: in-your-face-madman-rock-photographer. The daily activities of “Zloz” as part of the rock ’n’ roll stage show, his work in the studio plus a behind-the-scenes-view at his private life, are well documented and collaborated by friends, family, colleagues and the stars themselves.”

I loved it! It’s not on Netflix or Hulu. I watched it on YouTube. I think any music fan would really appreciate this production whether or not you had ever heard his name before. Let me know what you think if ya watch it.