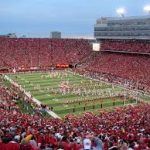 The University of Nebraska has now officially cancelled the Husker football team’s Red-White Spring Game on April 18th out of concern for public health and safety of fans, student-athletes and staff. All ticket holders for the Spring Game will receive a full refund for their order. Tickets will be automatically refunded onto the credit card used for the original purchase or by check (cash/check transactions). The Nebraska Athletic Ticket Office is closed to the public for in-person assistance until further notice. You may still reach the Ticket Office by phone during regular business hours (M – F, 8 a.m. – 5 p.m.) at 800-8-BIGRED.

NFL draft analyst Gil Brandt says Alex Davis is on teams’ radars after his performance at pro day in Lincoln. Brandt noted that Davis checked in at almost 6-foot-4, 250 pounds and ran a 4.82 in the 40 to go along with a 34.5-inch vertical, 10-foot broad jump and 20 reps of 225 pounds in the bench press. Brandt said Davis is now in the conversation as a potential free agent pickup for teams.

Kansas State has hired former Husker Steve Stanard as linebackers coach. Stanard began his college coaching career in 1988 as a student assistant coach at his alma mater. During his time in Lincoln both on the field and on the sideline, Stanard was a member of 12 total bowl squads as either a player or a coach. After a three-year stint with the Huskers, Stanard received his first full-time coaching job in 1991 at Nebraska Wesleyan. He served as the school’s defensive coordinator, and later, head coach and assistant athletic director.

The Nebraska men’s basketball team picked up a commitment on Saturday morning from Western Illinois transfer Kobe Webster. A 6-foot tall grad transfer point guard, Webster will be eligible immediately next season. He was a three-year starter for the Fighting Leathernecks and averaged 17.1 points, 3.6 assists, and 3.2 rebounds in 33.7 minutes per game last season. Webster, who has yet to visit Nebraska, announced his decision on social media on Saturday morning. A native of Indianapolis, Webster met with head coach Fred Hoiberg and assistant Matt Abdelmassih while the Huskers were in Indy for the Big Ten tournament. Webster chose the Huskers over interest from Xavier, Arkansas, Temple and a host of other schools. The commitment leaves Nebraska one scholarship over the 13-man limit, but attrition is expected as head basketball coach Fred Hoiberg will begin meeting with current members of the team. The addition of Webster gives Nebraska additional backcourt depth in the event that point guard Cam Mack does not return next season. Mack announced Thursday that he was declaring for the NBA, but has not hired an agent so that he can retain his eligibility. Guard Dachon Burke indicated last week that he is focusing on graduation, meaning his future with the program could also be cloudy.

The MIAA CEO Council voted unanimously to cancel the remaining spring 2020 conference regular-season competition schedule and the 2020 MIAA conference championships due to concerns regarding the global coronavirus (COVID-19) pandemic. The previous decision to indefinitely suspend all countable athletically related activities (for all MIAA sports, regardless of season) remains in effect. The MIAA is taking these unprecedented actions to help our campuses and communities continue to address this public health crisis.