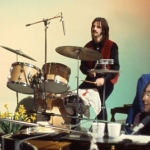 The next Beatles film is headed to theaters.

The director of Lord of the Rings (Peter Jackson) has an updated version of their Let it Be documentary, featuring never-before-seen-footage as well as what was captured in director Michael Lindsay-Hogg’s film of the band’s 1969 sessions for that album. It’s called The Beatles: Get Back.

Paul McCartney says, “I am really happy that Peter has delved into our archives to make a film that shows the truth about The Beatles recording together. The friendship and love between us comes over and reminds me of what a crazily beautiful time we had.”

And Ringo Starr adds, “I’m really looking forward to this film. Peter is great and it was so cool looking at all this footage. There was hours and hours of us just laughing and playing music, not at all like the version that came out. There was a lot of joy and I think Peter will show that. I think this version will be a lot more peace and loving, like we really were.”

It be in theaters on September 4th and I will be there.