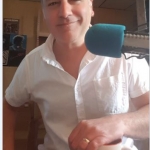 I started this blog unknowing of the subject matter. Sounds nutzo, doesn’t it? I knew if I just started writing, a subject, topic or idea would happen naturally. The first thing that popped in my head is how we were more united as a nation when we were all watching the same things. Those 13 channels insured that if there was an awards show or a big game on, the entire country tuned in. Now we are distracted and scattered due to information overload. Thank you is in sincere order to technology for bringing us major convenience of infotainment through the internet – that same thank you is spoken out of only one side of my face. The other is saying that same technology gives everyone a voice and now we are well ensconced in the age of rude. It’s discouraging to see how quickly we pounce on one another and it’s frightening to read how easily damaging, disparaging words are put in print. It’s the age of rude and I don’t like it. It’s a constant struggle to stay focused. If you’re going online to see what the temperature is, do just that and don’t stop along the way to see a dog push a cat’s head into the snow or read who called whom a liberal ***K-Tard. The age of rude will go away or weaken if enough of us simply don’t participate.