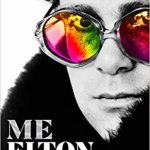 Described as one of the music world’s most anticipated memoirs gets its release today (10-15-19) It’s called ‘Me’ by Elton John.

When asked about his memoir, Elton John said, “The book is incredible. It’s incredibly honest. And I’m so happy with it. If you think the film’s [Rocketman] out there, wait til you read the book.”

The narrative for the book was taken from a series of interviews he did specifically for the book and said, “I [got] in trouble [by my father] if I ate celery in what was deemed The Wrong Way. The Right Way to eat celery, in the unlikely event that you’re interested, was apparently not to make too loud of a crunching sound when you bit into it. Once, he hit me because I was supposedly taking my school blazer off incorrectly.”

Among the revelations: just before the start of his Farewell Yellow Brick Road tour, he was diagnosed with prostate cancer, which resulted in him unable to control his bladder. This meant having to wear a diaper, and he tells of urinating into it while singing “Rocket Man” during his Las Vegas residency