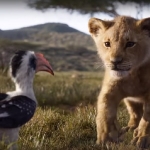 Back in the 90’s my love for The Lion King and Simba was bigger than words could ever describe. I was hooked the moment the film came into my life. Watching the Lion King was my first film to see in theaters and I remember the excitement of going to the show like it was yesterday. It was the perfect introductory film for me. The music was incredible, the characters were likable and I just knew early on this movie was very special. I loved that my grandmother, whom I adored so much, wanted to get us out of the house to see this epic film. We attended the film at a second run movie theater called the Dollar-Fifty Movies ($1.50 movies) which had half-priced admission on Tuesday. So needless to say, we went on a Tuesday afternoon for just $0.75 a person. My brothers and I shared a BIG bag of popcorn and each had a pop. I didn’t know they made bags of popcorn that big and I didn’t know a movie screen could be so big either. Honestly, everything felt larger than life, even the animals on the screen; cute little Simba wasn’t all that small after all. 🙂 🙂 Clearly the film left a BIG impression on me and was really the driving force behind my passion for movies and music. I remember this day so clearly that I also remember the snack we had once we got back home, it was celery sticks and peanut butter with raisins. That was another first for me, but not one I really liked. I fought my grandma on that dang celery until the threat of a whoopin’ came into play, that was enough to make me eat the snack she planned for us.

Decades later, we were greeted with a new version of the Lion King for a whole new generation to be introduced to. As much as I love the Lion King I haven’t watched the new one yet. Believe me, this was not easy to do. I have been waiting ever so patiently for our friends at the Grand Movie Theatre in Historic Downtown Grand Island to get the movie. I just feel that watching the new Lion King should be done in a place that would give me all the feels and nostalgia that I felt the first time I watched the original Lion King. The admission pricing is similar and simply can’t be beat in this day and age. Now I’ve heard mixed reviews on the new film and I know there are some changes, but I am very excited for this remake. The last remake to really excite me was “Beauty and the Beast”, but I’m hopeful for this!

I would encourage you to remember special places like the Grand when planning your future movie adventures. I love this theater because of the low prices, excellent sound and that it is run by volunteers. Now get out and make some special memories with the little ones in your life! “Remember who you are!”