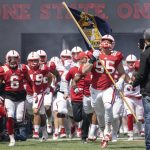 The Nebraska football team capped off their first week of fall camp this past weekend, working out in full pads for nearly two and a half hours Friday, and holding thier first full scrimmage yesterday. Head Coach Scott Frost said he’s pleased with the team’s progress, saying “Every position looks better than it did a year ago. The speed of practice looks better than it did a year ago. I’m having a lot of fun coaching this team. Last year there were times it was hard coaching the team, but this year everybody shows up with a smile on their face. I don’t see one person that I don’t want to talk to and they’re having fun. This is a fun team to coach, so there’s just a ton of things that have gotten better and it’s up to us as coaches and players to make sure that improvement leads to success.” The team has today off, but will hold their 10th practice of the fall tomorrow. The Huskers open the season Saturday, Aug. 31st hosting South Alabama. Kickoff will be at 11:00. You can continue to follow the team’s progress by visiting www.HUSKERMAX.com.

The Nebraska men’s basketball team will wrap up their European tour today against the Italian Select team. Tipoff is this morning at 11:00 central time. The Huskers are 3-0 on their overseas visit.

In Legion Baseball action; The Hastings Five Points Bank Seniors saw their season come to an end on the final day of the Mid-South Regional at Duncan Field yesterday. Hastings was edged by the team from Bryant Arkansas 3-2. Festus of Missouri topped Bryant 8-3 in the championship game, earning them a trip to the Legion Baseball World Series in Shelby, North Carolina.