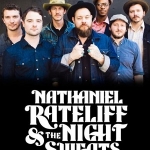 When the Rolling Stones come through town on Saturday, August 10, Nathaniel Rateliff & the Night Sweats will open the concert at Broncos Stadium.

The Night Sweats have been touring aggressively since the release of their 2018 album, “Tearing at the Seams”. The group has made appearances on The Tonight Show Starring Jimmy Fallon, The Late Show With Stephen Colbert, at the Grand Ole Opry and Apollo Theatre, as well as playing several major festivals: Coachella, Bonnaroo, New Orleans Jazz Fest, Newport Folk Festival, Glastonbury and the Monterey International Pop Festival.

In short: Rateliff and his band are primed to share a stage with the Rolling Stones.

Rateliff is a real character, they’ll be a great opening act for the Stones!