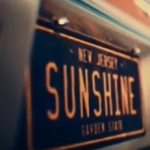 Bruce Springsteen has a new album on the way and just after midnight last night he released the first track called “Hello Sunshine.”

In a statement, Bruce described the album as a throwback to his solo recordings, featuring “character-driven songs and sweeping, cinematic orchestral arrangements,”

The project was inspired by the Southern California pop records of the 1960s and ’70s,