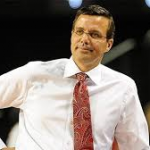 The Nebraska men’s basketball team built a double-digit lead late in the first half, and never trailed again in a 69-61 upset win over 21st-ranked Maryland yesterday afternoon in the second-round of the Big Ten Tournament at the United Center in Chicago. The Huskers got 58 points from the big three of James Palmer Jr., Glynn Watson Jr. and Isaiah Roby. Palmer had a game-high 24 points, Watson scored 19 and Roby added 15. The Huskers got two points and a game-high nine rebounds from Tanner Borchardt, a career-high five points and four rebounds from Johnny Trueblood and four points, four rebounds and a career-high five steals from Thorir Thorbjarnarson. The Husker’s defense was stout. The Terps struggled from the field, hitting just 36 percent of their shots and only 18 field goals, their fourth-worst shooting percentage, and second-fewest field goals this season. Now 18-15 on the season, the 13th-seeded Huskers will play the 4th-seed 19th-ranked Wisconsin in the tourney’s quarterfinal round this afternoon. In their only meeting this season, the Badgers defeated the Huskers in Lincoln, 62-51. The Huskers and Badgers are set to tipoff at approximately 2:00 this afternoon, or 25 minutes after the conclusion of the Michigan State-Ohio State quarterfinal, which begins at 11:30.