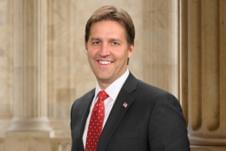 WASHINGTON, D.C. – The following is from the office of U.S. Senator Ben Sasse:

“We have an obvious crisis at the border — everyone who takes an honest look at the spiking drug and human trafficking numbers knows this — and the President has a legal path to a rapid response under the National Emergencies Act of 1976 (NEA). I think that law is overly broad and I want to fix it, but at present Nancy Pelosi doesn’t, so I am therefore voting against her politically motivated resolution.  As a constitutional conservative, I believe that the NEA currently on the books should be narrowed considerably. That’s why I’m an original sponsor of Senator Lee’s legislation, and it is why I have repeatedly gone to the White House to seek support for NEA reform.

“I urge both the Majority and Minority Leaders to assist in moving this legislation through committee and quickly to the Floor for debate, negotiation, and passage through the full Senate. If this Congress is serious in its concerns about decades of executive overreach, we will devote ourselves to systematically reclaiming powers Congress has been imprudently granting to presidents of both parties for far too long. Today’s resolution doesn’t fix anything because the root problem here can’t be fixed with bare-knuckled politics but rather with a deliberate debate about the powers that Congress has been giving away and that the Executive has therefore claimed.”