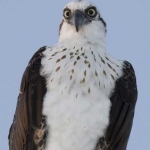 This information came to me inside my utility bill and I felt compelled to share it because I think it’s information that few of us have. I will paraphrase the letter:

A sea hawk called a Western Osprey is an impressive looking raptor that resembles a bald eagle — In the wild, ospreys have very few natural predators but baling twine is posing a threat to these birds.

Baling twine, often left in fields after livestock have been fed, has become a problem for nesting ospreys, who are drawn to the twine when searching for soft items to line their nests.

Some become entangled in baling twine and hang precariously from their nesting platform, unable to free themselves. In one instance a ball of twine had been caught in an osprey’s talons for months prior to her entanglement.

One study revealed that 30% of the nests had at least one chick tangled in twine. “For many, it was too late”, said the study’s results.

To prevent further such entanglements, we are reminded to pick up all used twine in fields and on fence posts, or at least cover the twine with a tarp during nesting season, which is March until June.

Farmers are urged to store used twine out of sight, dispose of old baling twine safely out of the reach of ospreys and tell friends and neighbors about this.

IN summary, Northwestern Energy are working actively to protect osprey. To prevent them from building their nests too close to power lines, crews are installing safe, alternate platforms near the lines and installing nest deterrents on poles that are favored by osprey.

• Pick up all used baling twine in fields and on fence posts.

• Store used twine out of sight, in barns or in 45 gallon drums.

• Dispose of old baling twine safely out of reach of ospreys.

• Spread the word — tell your friends and neighbors.