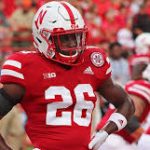 The Nebraska football team worked out in full pads for two hours Wednesday, as they continued to prepare for this Saturday’s game against Illinois. Offensive Coordinator Troy Walters addressed the media after practice. The Huskers are on the verge of having potentially two 1,000 yard receivers and a 1,000 yard rusher this season. Walters was asked if the gameplan will help wide receivers Stanley Morgan, J.D. Spielman and running back Devine Ozigbo achieve those individual milestones. “We’re trying to win games, and for us to win games we have to be explosive on offense,” Walters said. “It’s exciting as a staff, because Stanley, J.D. and Devine are such good people. They’re role models, they reflect the culture and what we want. They come to work every day and work their tails off, they’re unselfish and team-first. We want all the awards that those guys can get.” The Huskers and Fighting Illini are set to kickoff Saturday morning at 11:00.

In other Husker news: Walters said freshman Miles Jones underwent surgery on his injured shoulder and won’t return this season. The 5-foot-8, 175-pound Jones has been working at the versatile Duck-R position this season to take advantage of his ability as a runner and receiver. Jones could also factor into special teams in the future. A major signee in Scott Frost’s first recruiting class, Jones had a 21-yard catch and one carry for five yards in Nebraska’s win over Bethune-Cookman. Visit www.HUSKERMAX.com for more.