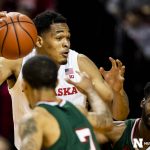 Glynn Watson Jr. scored 19 points to lead four Huskers in double figures, as the 25th-ranked Nebraska men’s basketball team crushed Mississippi Valley State, 106-37, Tuesday evening in the season opener for both teams. Watson, who played just 19 minutes, was 7-of-10 from the field, including five 3-pointers. The Huskers return to action on Sunday afternoon, as they host Southeastern Louisiana at 3:00.

The Nebraska women’s basketball team opens the regular season tonight with a major challenge, hosting 2018 NCAA Tournament qualifier and defending Missouri Valley Conference champion Drake. Tipoff is at 7:00. The Huskers return their top five scorers from their 2018 team that finished with a 21-11 record and advanced to the first round of the NCAA Tournament.

The 6th-ranked Nebraska volleyball team begins a four-match road swing tonight with a match at Iowa.
The Huskers enter the match at 18-6 overall and 9-5 in the Big Ten. Iowa is 13-12 on the season, 5-9 in Big Ten action, and have gone 1-6 in their last seven matches. First serve tonight is at 7:00.