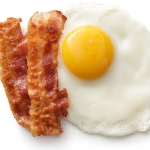 I found it on MSN:
The bacon fad may or may not be abating somewhat, but there’s no disputing that we’re eating more of it than ever. Bacon consumption levels were at historical highs last year, according to The National Provisioner, a food business trade publication. Bacon has been appearing in all menu categories — even desserts and beverages, both of which saw a 17% rise in bacon use over 2016.

Bacon has long been an essential part of the American diet, at least for carnivores, even before people started putting it in candy canes, coffee, soda, and other places it probably doesn’t belong. It can attract non-carnivores, too: Bacon has been called the ultimate “conversion food” because it tempts even the most ardent vegetarians.

Bacon prices have risen and fallen substantially over the years. According to the U.S. Bureau of Labor Statistics, the average price of a pound of sliced bacon has more than doubled over just the past two decades from $2.64 in January of 1998 to $5.42 in July of this year. Along the way, though, it hit even higher marks, reaching $6.37 in September of 2017 — and the price has been trending downward since that peak.

Price swings for bacon are so notable that for 50 years, pork bellies — the meat American bacon is made from — were traded as a commodity on the Chicago Mercantile Exchange, with frozen bellies stockpiled as a hedge against rising seasonal pork prices. (The trade was halted in 2011 as seasonal demand for the meat evened out.)

While it may appear in many guises today, bacon is inextricably linked above all to another form of protein: the egg. Bacon and eggs is as emblematic a food combination as salt and pepper, chips and salsa, or burgers and fries.

If you copy and paste the following link in your browser, it’ll tell ya the price of bacon the year you were born. Well, I’m going to get breakfast now.