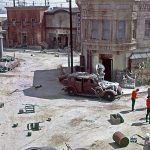 I have always liked to read liner notes and album covers. If the art is worth consuming, it’s worth further pursuing is my belief. It’s the way I am wired. I wanna know who sang the high harmony in “Bus Stop” by The Hollies (Graham Nash). I wanna know who performed background vocals for Clapton on “Wonderful Tonight” (“If I can’t have you” singer, Yvonne Elliman).

It’s not limited to music for me either. I do the same thing with television shows and movies. I like to know who stars in this and who produced that and co-wrote the thing for the guy who was married to the girl who died in CSI.

Here’s a great example: When Star Trek first aired, the show was so under-funded that they were forced to use the set for the town of Mayberry from The Andy Griffith Show in 2 episodes (“Miri” and “City on the Edge of Forever.”)

I just learned about this exciting nugget and make no mistake about it, I will be revisiting both shows soon. “City on the Edge of Forever” was always one of my favorite Star Trek episodes. One reviewer noted you can clearly see Floyd’s Barbershop and the Mayberry Courthouse in a couple scenes. Cool!

Does it make me a nerd? I don’t care if it does.