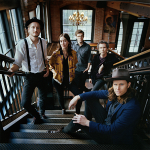 The Lumineers have added a show in Omaha as part of their 2020 headlining North American tour! They’ll be coming to the CHI Health Center on March 14, 2020. All tour dates are in support of their album III, which was released in September 2019.

The Lumineers are a contemporary rock and folk group from Denver, Colorado. Formed in 2005 by original and consistent band members, Neyla Pekarek, Wesley Schultz and Jeremiah Fraites, the band went on to achieve a large amount of critical acclaim in their less than a decade worth of playing. The group signed to Dualtone in 2012 to release their debut eponymous offering. The full length studio recording went on to sell almost a million units, which is a significantly staggering figure in today’s music industry. In addition, it peaked at number 2 on the United States charts as well as went Gold. The record was highly successful and influential in Canada and reached Platinum status. In addition, The Lumineers released two highly successful singles called “Ho Hey” and “Stubborn Love”. Both charted on US, UK and Canadian music charts.

The band is well known for their subtle folk and rock influences as well as a continuing leaning in the American genre which mingles light drumming, melodic vocals and acoustic guitars as a starting point. The group was also nominated for Grammy awards for Best Americana Album and Best New Artist. The Lumineers continue to record original music and tour the world.