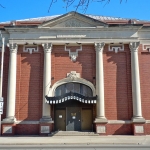 “Pan”, everyone’s favorite story of Peter Pan is a condensed adaptation that does an amazing job of retaining all the critical story elements. You’ll meet the dog Nana, who can’t stop the Darling children from following Peter and Tinkerbell through the nursery open window to Neverland. There, they make friends with the Lost Boys and some friendly Indians, as they encounter Captain Hook, his gang of wily pirates, and, of course, the ticking crocodile.
“Law and Order: Fairy Tale Unit, Episode 2”, if you like “Law and Order, Fairy Tale Unit” from last year, you’ll love this hilarious follow up. In the fairy tale criminal justice system, citizens are represented by two separate, yet equally ridiculous groups: the fairy tale police who investigate fairy tale crime, and the fairy tale district attorneys who prosecute the fairy tale offenders. But some days, these heroes must face a far darker challenge: nursery rhymes. These are their stories.
Angie Liske and Steven Gobel, are the drama directors, Larry Cast is Business Manager and Jeannee Mueller Fossberg, Producer. Children in grades 3rd through 8th will perform in this production.
Tickets are $3 for children, $5 for adults, free for children age 3 and under, available at Ace Hardware and Garden Center and at the Liederkranz. Shows are open to the public.
If you have any questions, contact Fossberg at 308-379-2015, Liske at 308-940-1365 or the Liederkranz 308-382-9337.

Add to my calendar
Copyright © 2020 by NRG Media. Internet Development by Frankly Media.