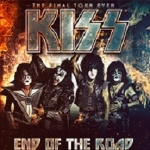 KISS already said farewell and now they’re coming back again for their final goodbyes in Lincoln after adding 75 additional dates to their ongoing “End of the Road” tour.