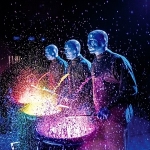 Lied Center for Performing Arts is thrilled to announce that the Blue Man Group SPEECHLESS Tour, featuring the world-renowned bald-and-blue trio, will visit Lincoln, Nebraska, for the first time since 2013. The show, which includes original compositions, invented instruments and unexpected situations alongside iconic Blue Man Group moments, will be at the Lied Center for Performing Arts Jan. 29-Feb. 2, 2020 for six performances.

Under the helm of visionary director Jenny Koons, in her first-time collaboration with Blue Man Group, the Blue Man characters embark on a fresh journey of discovery through this tour, the result of 27+ years spent observing humanity. Speechless, which features material that fosters communal moments, debuts the evolution of tube-based instruments to support all new music and includes large-scale audience participation.

“We are thrilled to welcome back the wildly popular Blue Man Group as part of our 30th Anniversary Season,” said Bill Stephan, Executive Director of the Lied Center for Performing Arts. “This new theatrical experience will allow our patrons to escape the ordinary and surround themselves in an explosion of comedy, music and technology.”

Event Website: https://www.liedcenter.org/event/blue-man-group
Add to my calendar
Venue: Lied Center for Performing Arts
The Lied Center is a national leader in presenting artists and collaborations normally seen only in the country’s major metropolitan centers, such as New York, Chicago and Los Angeles. In recent seasons, the Lied Center has served as the venue where Yo-Yo Ma filmed a portion of his 2015 documentary “The Music of Strangers,” American Ballet Theatre collaborated for the first time with the St. Louis Symphony, and the Chicago Symphony performed on tour with Conductor Jaap van Zweden – recently appointed as Music Director of the New York Philharmonic. The arts have a profound impact on the development of our community’s cultural identity – broadening perspectives, fostering diversity and encouraging collaboration. Your continued support underscores these values, and I look forward to seeing you many times this season at “Nebraska’s Home for the Arts.” Our mission is to educate, inspire and entertain the people of Nebraska through the performing arts.
12th and R Streets
Lincoln, NE 68588
Phone: 402.472.4747
Website: https://www.liedcenter.org/
Copyright © 2020 by NRG Media. Internet Development by Frankly Media.