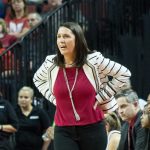 The Nebraska women’s basketball team rallied from a 25-point second-quarter deficit to tie the game in the fourth quarter, but 18th ranked Indiana did just enough in the final minute to escape with a 57-53 win over the Huskers at Pinnacle Bank Arena Sunday. With the loss the Husker women are now 15-9 on the season and 5-8 in the Big Ten. The Nebraska women host Penn State Thursday, tipoff is at 7:00.

The Nebraska men’s basketball team lost at 17th ranked Iowa Saturday, 96-72. Jervay Green led the Huskers with 18 points, while Cam Mack and Dachon Burke Jr. joined Green in double figures with 13 and 12 points, respectively. With their 8th straight loss the Husker men are now 7-16 on the season and 2-11 in the Big Ten. The Husker men are at 9th ranked Maryland tomorrow night, tipoff is at 7:30.

The UNK basketball teams defeated the Newman Jets at the Health and Sports Center Saturday. The Loper men shot a season best 55-percent from the field in an, 85-72, win. They are now 14-8 on the season and 8-5 in the MIAA. The 23rd ranked UNK women pushed their winning streak to nine in-a-row with a 59-46 win. Now 22-2 on the year, and at 11-2 in conference play, the Loper women are just one game behind nationally ranked Central Missouri for first place in the MIAA standings. The UNK basketball teams are on the road this week with games at Lincoln University and Central Missouri.

In other Loper action;

Junior co-captain Tiara Schmidt set a new school record in the weight throw and had a career-best effort in the shot put to lead UNK at the Northwest Missouri Bearcat Open Saturday in Maryville. Schmidt broke a 19-year old Loper standard in the weight throw when her third attempt flew 60-3. That allowed her to finish second, and best the previous school mark of 59-11, set by UNK Athletic Hall of Famer Janet Boettcher in February 2001. Schmidt also won the shot put thanks to a toss of 48-10.25. Nationally she now ranks seventh in both events. Overall the Lopers had 31 top 12 finishes on Saturday. The Lopers will spend Valentine’s Day at the Concordia Invite Friday.

The UNK softball team opened their season, and the Katie Ackermann era, by going 3-3 in Lubbock, Texas this past weekend. The Lopers opened with a pair of wins Friday, defeating Eastern New Mexico, 8-4, and Texas-Permian Basin, 8-7. They dropped both games Saturday, falling to former RMAC rival Colorado-Colorado Springs, 8-4, and Lubbock Christian, 5-4. They earned a split yesterday, losing to St. Edwards 14-6, but topped former RMAC foe New Mexico Highlands 5-4 in 8-innings. The UNK softball team will return to the Lone Star state this weekend for the 2-day Midwestern State Invite in Wichita Falls, Texas.

The rosters and coaches for the 62nd Annual Nebraska Shrine Bowl football game were announced over the weekend. Lincoln High’s Mark Macke will coach the North, while Ryan Thompson from Ashland-Greenwood will coach the South squad. The two rosters include a dozen Husker walk-ons. The 62nd Annual Nebraska Shrine Bowl will be played Saturday, June 6th, at UNK’s Ron and Carol Cope Stadium. For more information, visit www.NEShrineBowl.org.