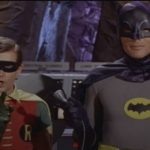 Batman had it in the 1960s! Finally, LAPD takes a page from Batman, testing a device that uses tethers that wrap suspects’ bodies.

It’s called BolaWrap: The devices are about the size of a cellphone and they shoot cords around a person’s legs or arms. The LAPD will start testing the devices in January.

It has been reported that the tether leaves a small puncture wound where it connects and can be painful if a struggle ensues but it is meant to be a restraining device used to “ensnare an individual’s body to restrict mobility, giving officers seconds to swarm the person without using more drastic measures such as a Taser or gun”.

To gain control of a dangerous suspect without injuring anybody seems way too long overdue (if I may be critical).

Do the writers of the original Batman series get credit for this? They absolutely should (I think).