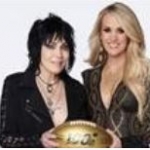 Carrie Underwood and Joan Jett helped usher in the NFL’s 100th season on September 8, unveiling the new version of the “Sunday Night Football” opening theme, “Waiting All Day for Sunday Night.”
The theme song is based on Jett’s 1988 classic “I Hate Myself for Loving You.”

The performance by Underwood and Jett, which was filmed at Mercedes-Benz Stadium in Atlanta, was aired for the first time Sunday night.
When it was announced earlier this year that she would be performing with Jett this season, Underwood said, “I have always been a huge fan of Joan’s, and I’m thrilled that she’s joining us.”
“What better way to pay homage to the original SNF opening song than by getting to play with her on prime time’s biggest stage?” she added.