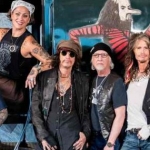 Aerosmith will be featured on a new episode of the History channel series American Pickers. The band will be reunited with their original 1970s touring van after it was located last summer by hosts Mike Wolfe and Frank Fritz in the woods near Chesterfield, MA, about 110 miles west of Boston.

The rusted, 1964 International Harvester Metro was traced to the property’s owner, identified only as Phil, who said the previous owner had a connection to the group and the vehicle was there when he bought the land.

The pair reportedly paid $25,000 for the van and, after restoring it to its original condition, viewers will see Wolfe and Fritz deliver and reveal the vehicle to Aerosmith during a new episode filmed in Las Vegas, NV, where the band are currently playing shows as part of their “Deuces Are Wild” residency at the Park Theater at the Park MGM hotel.