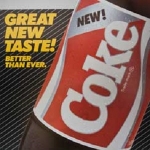 Yep, the greatest failed product of the 80’s is making a come back for a short time this summer. Coca-Cola is bringing back a limited number of New Coke cans in honor of the upcoming third season of “Stranger Things,” in which the product is featured. Season three will kick off on Netflix July 4th. The third season of the show takes place during the summer of 1985… when Coca-Cola debuted a new recipe for its iconic beverage. Something that seemed like a good idea, but wasn’t.

However, bringing New Coke back is a way for Coca-Cola to “not take ourselves too seriously,” said Coke’s senior VP of Marketing to CNN Business. “And it wasn’t easy to recreate the product: Coca-Cola had to reach into its archives to get the design of it right, and dig through its vault to recover the recipe.”

There are three ways for customers to get the retro product:

Coca-Cola has produced under 500,000 of the New Coke 12-ounce cans, and expects to run out quickly.

The company is also selling “Stranger Things” themed cans of Regular Coke and Coke Zero Sugar, and is releasing a remake of a 1980s ad featuring characters from the show.

This seems like a good idea, but then again so did “New Coke” in the 80’s and that was a flop! Consumers reacted so poorly to the new drink that Coca-Cola pulled it from shelves after a few months. For now, we sit and wait for the other shoe to drop.